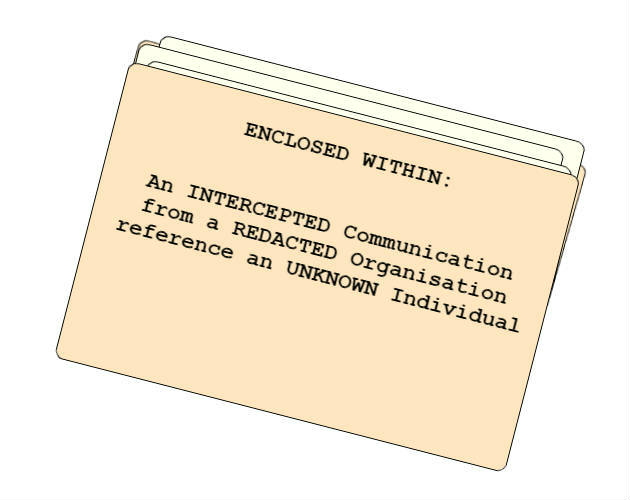 Also published same date as a Development Log for An INTERCEPTED Communication from a REDACTED Organisation reference an UNKNOWN Individual (2019) on itch.io

A game that I’ve been affectionately calling INTCOM has released, and while I’m never much for placing importance on the author’s point of view, this game is an extension of a conversation between me and the micro-game developers out there. To release it without my own perspective would make it less accessible, and perhaps less interesting, neither of which I want for a cute little game with a very long name. Fear not, though, my descriptivist blood still pumps wildly, and any readings that you have of my game are, in fact, canon. ​

Where Did This Start?

Being October, it is 200 word RPG time. This year, I have found myself at odds with 200 Word’s criteria. Namely, I dislike the idea that actionability defines a good roleplaying game. For the most part, I understand what 200 Word are intending for that criteria. They want completeness, but in doing so they define what makes a “complete” game in a way that is not particularly interesting to me. Yes, completeness is a design goal I’ve had in the past, and is high-verb interactivity. However, 200 Word seems to conflate completeness of ​text​ with completeness of ​document.​ Completeness of writing with completeness of idea. Resolution with wholeness. And so, the challenge began: Could I make a game that was complete, but unactionable? Whole, but unresolvable?

The game began with this idea, that I think is captured in the final document: A game where playing it, and not playing it, are indistinguishable. God, that’s interesting to me. I knew that I wanted to include some sort of dark military imagery. Frank Stella’s Die Fahne Hock! (1959) was just too influential on this moment in my design to not include ​something​ so evocative. I settled on a Cold War motif, with the character of play being a Sleeper Agent, activated almost as if by mistake. The key to me here is that a player who is playing (in good faith *cough*) must live their life as normally as possible. The story, then, is not in actionability, but in perception. More on this later.

Many ideas hit the floor immediately. Codewords and Numbers Stations are both incredibly evocative for me. I love all that SCP shit. Give me weird creepy longwave transmissions and I’ll sit in awe. Both codewords and numbers stations are just so wonderfully low tech. One-time pads too. For all the 300-bit hyper-encryption dynamos, in the end we rely on pens, papers, and memory. Reminds me of how ballot boxes in the UK use pencils for fear that pens are too high-tech and could be switched out for disappearing ink. However, I just couldn’t make it work. I wanted the redacted bars. They are super duper important to the look and function of the piece as a whole. They hide a bunch of information that would have no reason to be hidden otherwise, and they also just create a LOOK (more on that later). But, with numbers, codewords (as in the final version), I couldn’t think of any diegetic reason to have them visible. Plus, there’s a distraction they provide that I don’t want. Adding detail to this game detracts from the effect that ANYONE reading could be the sleeper agent. Codewords, insertion dates, locations, all of them just gave too much detail for it to feel personal. I was trying to reach EVERYONE while making them feel like I’m only reaching THEM, it was better to go for Barnum statements and broad approaches.

There are two strong elements to the visual design (besides the redacted bars that are mostly self-explanatory) that contribute to the weird aging of the document. Courier New for that typewriter feel, and the jpeg compression. The typewriter feel adds to the Cold War vibe, but also makes the document a lot more pleasant (which, considering the artifact, is a kindness). The >> and << bound the message, keeping the eye bouncing between them, and the large amount of white space between the thematic “box text” that is the first five lines, and the actual meat, makes it easier to reread the bits that matter to you if you want to find it. It’s a bit visually boring, though, with one font and one colour. I considered a few images, maybe a stamp or something, but less is more always won out. There’s a version of this that looks prettier, but it’s less the game I wanted to make.  As for the jpeg look: Make the image, save it as a jpeg with maybe 70-80% compression each time, stop when it feels right. Getting the holepunch-photocopy holes to look worn was probably the biggest reason I kept pushing through. Still not super happy, but it already looks disgusting enough with all those artifacts. I’m reminded of something George Watsky, rapper, said once about his work. To paraphrase: “I could rap faster, but I’m already on the limit of what people can understand. And I want people to listen to what I’m saying, not just hear me being fast.” Same thing here. It’s still a ​little​ too perfect for what I want, but there’s a line where too much compression just makes it inaccessible to read. In fact, the title page (with the manilla folder), has less compression for that reason. That advertising image needed more visual clarity than the document.

All in your Head

This isn’t a joke. There’s a real game here. Imagine you are a sleeper agent, activated and told that you’ve been discovered. But don’t blow your cover just yet! You might get out of this. Of course, your handlers can never contact you to tell you the threat is gone. And you’ll never know if you’re being watched. As a young kid I used to pour over these spy books​ that taught me how to use Dead Drops, and recognise people in disguise. I used to walk the streets of quiet suburban Western Sydney and try to find spies. Big people were, of course, faking it so that they could carry documents and equipment. That hat was definitely just to cover her face. Anyone with a camera was a top suspect. I felt powerful, finding these terrible spies, and I’d pause at good Dead Drop spots to check if there was a secret message I could use to unearth the baddies, or assist the goodies. That was me as a kid though, born in the breaching 90s. Late enough to not have experienced the realities of the cold war, early enough to not have experienced the realities of government surveillance. It speaks, then, to my changing views on geopolitics, that spyhunting is no longer from that position of power, but rather from a position of threat. The game of INTCOM is one of constant vigilance and fear: You are under threat, anyone could be coming for you, you have to find them but ​GOD DAMMIT ​ do not let them know you know. The actions, as I said in earlier sections, are all in the player’s head. Look, think, interpret, but don’t do anything about it. There is no resolution. There are only two ways the story of the hunted Sleeper ends: Either you play normal long enough to die of old age, or you fuck up and someone gets you first. Either way your actions are the same. Stick to your routine. Try to have a happy life, or at least make it look like you are.

For further on “games where playing and not playing look the same”, I would recommend you first understand that I just lost The Game, and now so have you.​​

I thoroughly enjoyed writing INTCOM, and I also really enjoy reading it, and (if you promise not to tell the baddies), I’m enjoying playing it right now in an airport waiting for my flight to Big Bad Con. If you found any joy from it, please leave a rating and a comment. It’d mean the world to me (and I promise not to tell anyone that you’ve been activated). While the game is PWYW, putting a buck or two toward it does facilitate my next projects, if you can. Either action validates that the time put into devlogs like this are valuable, and games that are extension of theory have a space in our conversation.

With Love in Games,